What do you get when you cross school district retirees with hometown baseball?  A special celebration called “Gaston County Schools Retirees Night” with the Gastonia Honey Hunters.

Tuesday evening, Gaston County Schools will honor its long-time employees who retired during the 2019-2020 and 2020-2021 academic years.  The event will provide plenty of fun, fellowship, and baseball as retired educators, their guests, and school district staff come together at CaroMont Health Park.

“We are looking forward to celebrating our retirees with the Gastonia Honey Hunters,” said Superintendent of Schools W. Jeffrey Booker.  “To have a new baseball team in Gastonia is exciting, and the new stadium is beautiful.  So, who knows?  If we get positive feedback from our retirees, this may be the beginning of a new tradition.”

Typically, retirees are honored during an afternoon reception at the country club.  However, the pandemic disrupted those plans.  The school district conducted its annual “Excellence in Education” awards announcement on June 1 at the ballpark.  Because the program went so well, it sparked the idea to have the retirees celebration at the ballpark, too.

Game time is 6:50 p.m. against the Southern Maryland Blue Crabs.  An hour before the first pitch, the retirees and their guests will be treated to a baseball-inspired meal with hotdogs, hamburgers, barbecue, and more.

Our retirees: what do they have to say?
Ahead of our “Gaston County Schools Retirees Night” with the Gastonia Honey Hunters, we spoke with five retirees to find out what they think about retirement and what they’ll miss most as they begin a new chapter in life.

▪ Thressia Greer, Lingerfeldt Elementary
Among the retirees is Thressia Greer, who served as the parent involvement specialist at Lingerfeldt Elementary for a majority of her 31 years with Gaston County Schools. Greer said she is looking forward to reuniting with friends she hasn’t seen in a while and also seeing her colleagues in the spotlight for their hard work and dedication.

“Being recognized is such an honor,” Greer said. “It’s overwhelming to be a part of an amazing group of educators, and it means so much to me.  My work at Lingerfeldt was my heart. I loved my job and seeing the growth in our students. It was so rewarding.”

▪ Jacqueline Robinson, Hunter Huss High School
Jacqueline Robinson, former Hunter Huss chorus teacher who retired last year after a 40-year teaching career, said she loved getting to see her students experience new things for the first time. In addition to traveling to places like Washington, D.C., and performing at Carnegie Hall three times in New York City, Robinson said the highlight of her career was taking a group of students to England in 2000.

“I had been overseas, but only one of the students on that trip had been. They got to sing in these huge cathedrals like Westminster,” Robinson said. “It was amazing to see the looks on their faces to actually see these places and to realize that their whole world is not just in Gastonia.”

▪ Diane Leazer, Bessemer City High School
Dianne Leazer says that it’s easy to misjudge students without knowing their whole story. But if you really take the time to get to know them and learn more about them, you can build an important foundation for learning. Leazer, who taught English at the high school level and language arts and social studies at the middle school level, said realizing that was a revelation for her early on in her teaching career.

“Those children taught me more in 46 years than I was ever able to teach them,” she said. “But seeing the joy on their faces when they finally get to graduate or the tears they had when they finally got that lesson, that’s what it’s all about.”

“My favorite days are the days when a child walks into the office and I could make them smile,” she said. “Sometimes, that’s all they were looking for – just for someone to be kind to them and to encourage them.”

▪ Alan Stewart, Forestview High School
Alan Stewart says he is the last of the “Forestview Original” to retire. The athletic director, who served Gaston County Schools for 30 years, came to Forestview when it opened in 1998.  He said he’s seen a lot of changes over the years, both in education and in the students who come through the doors.

“There have been a lot of changes in my time, but the one constant was how students grew with confidence over time both in their sport and outside of it,” he said.  “Sports allow students to find their niche in high school, and I’m proud to have been a part of that.”

And as for the baseball game on Tuesday? The Gastonia native is looking forward to seeing a Honey Hunters game at CaroMont Health Park for the first time.  “I was born and raised here.  My children are all grown, and I can’t wait for them to come back and see what we have right in the heart of Gastonia. It’s amazing.”

PHOTOS: Our retirees at the ballpark 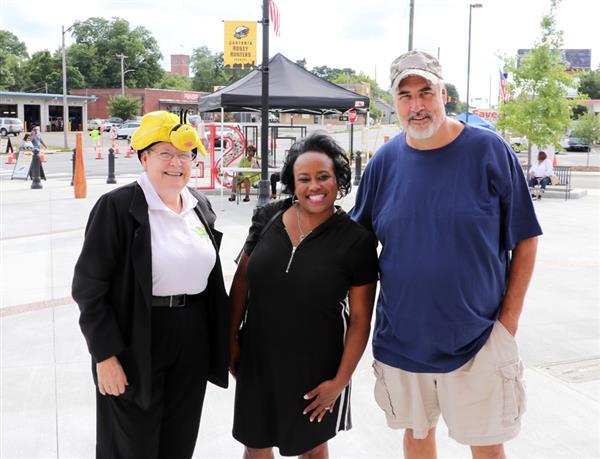 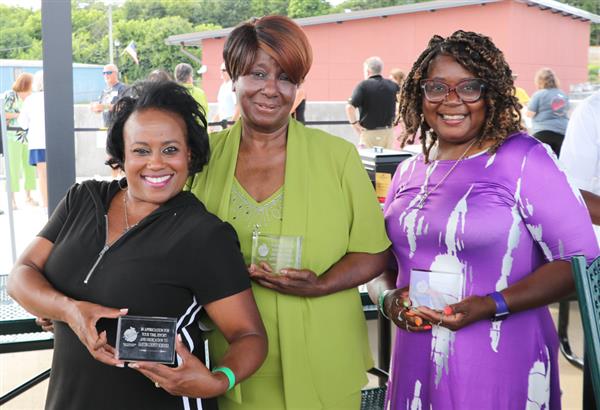 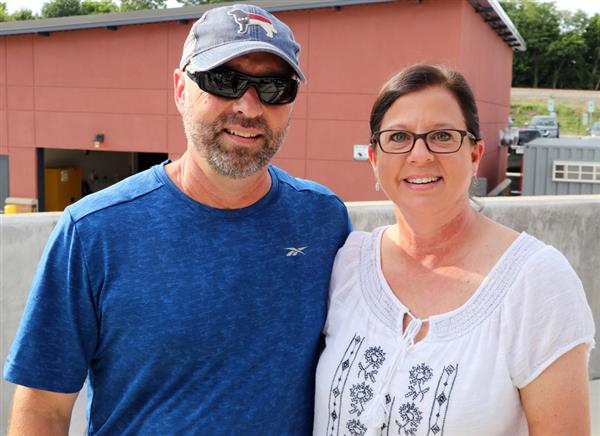 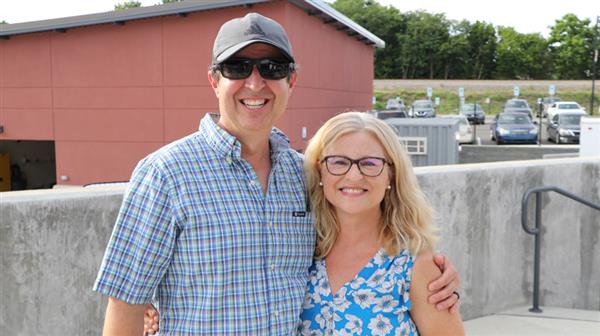 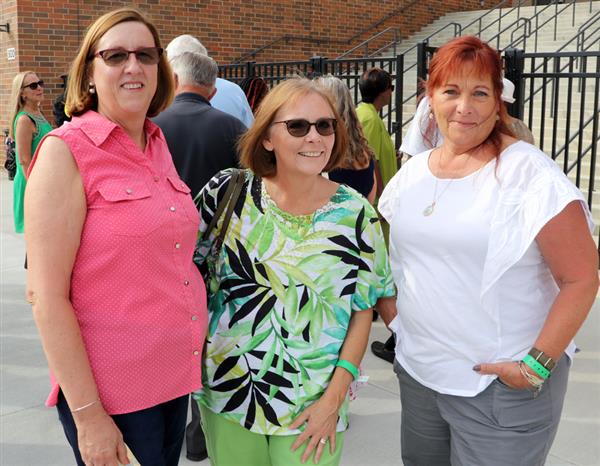 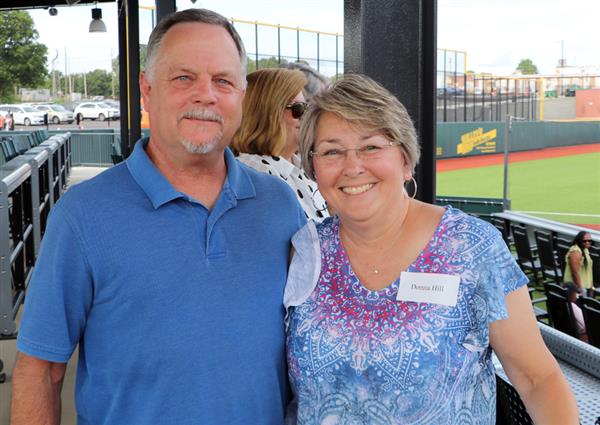 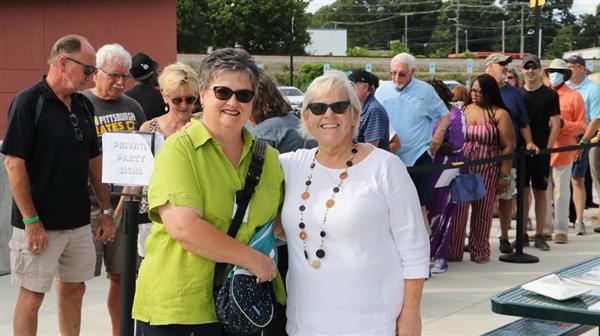 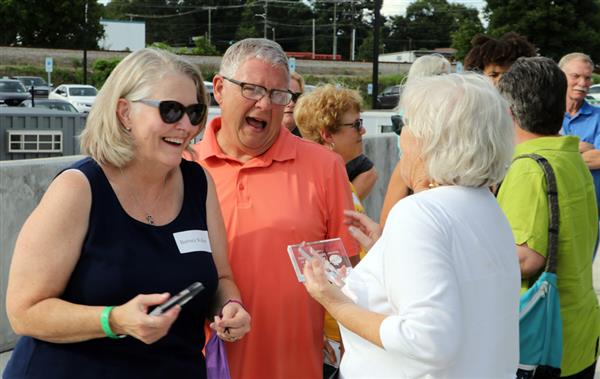 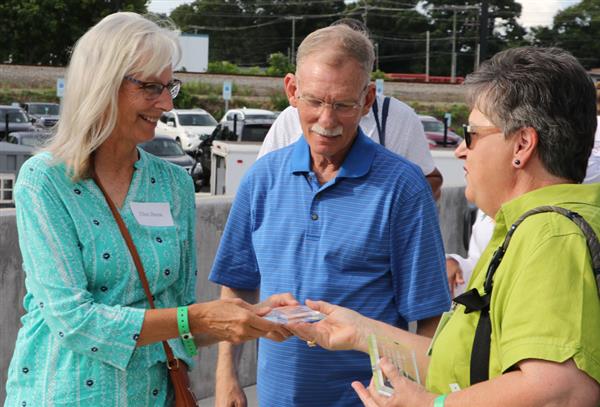 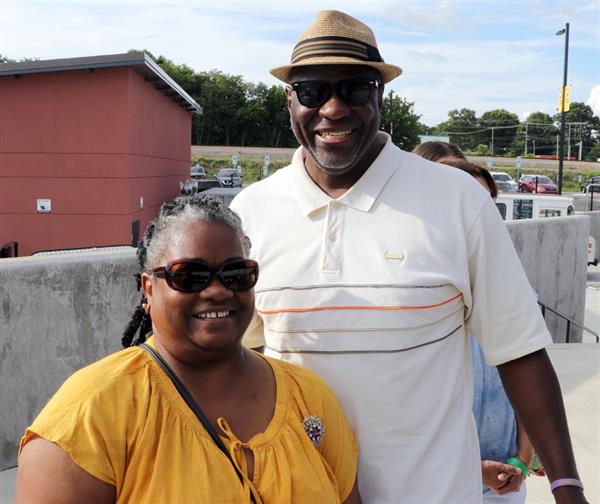 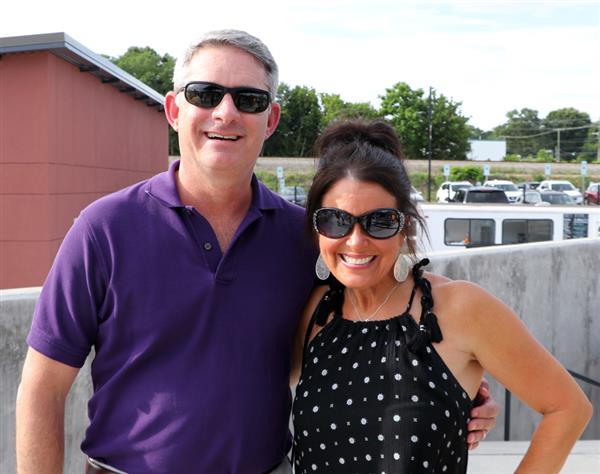 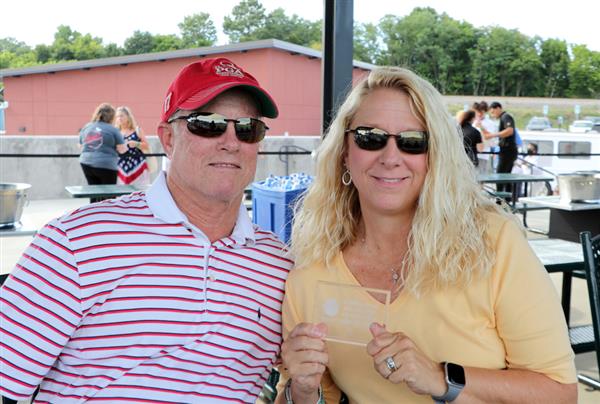 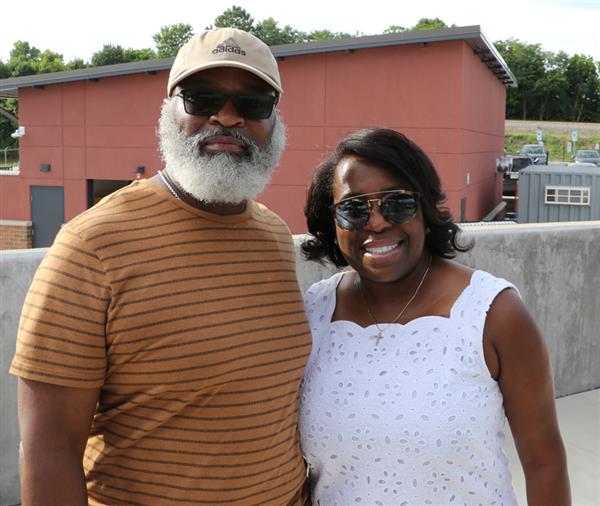 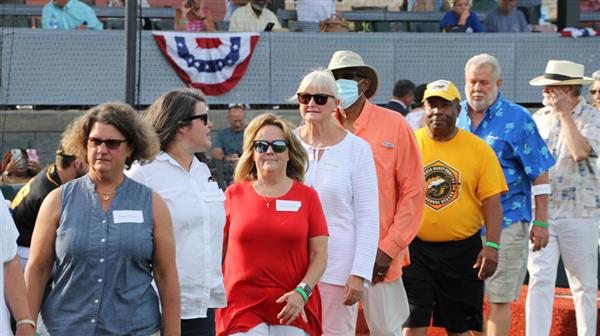 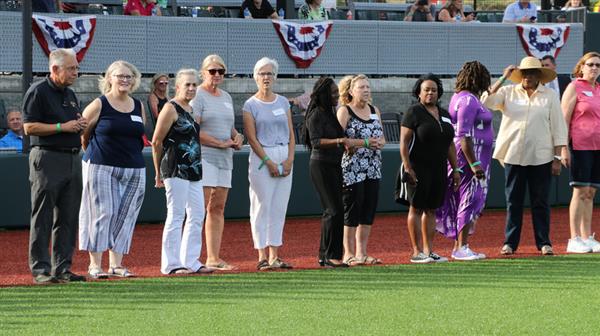 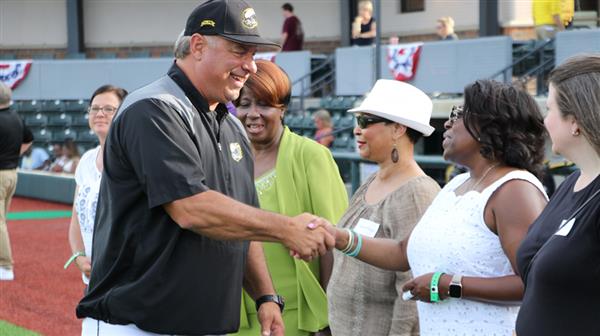 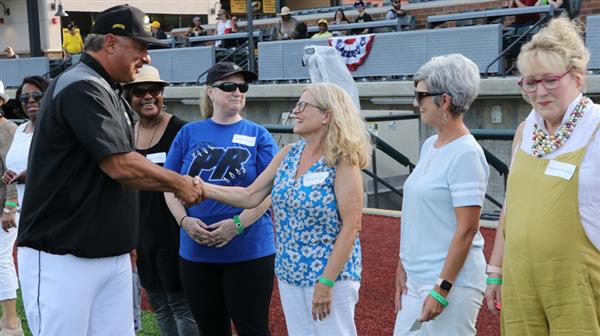 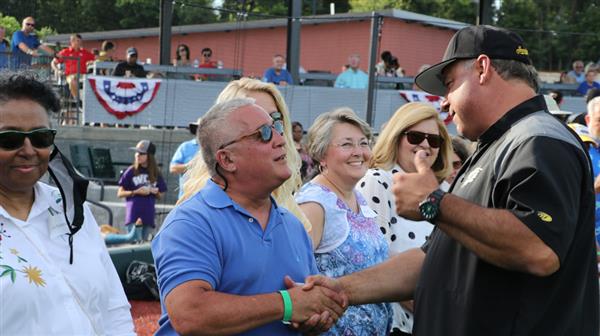 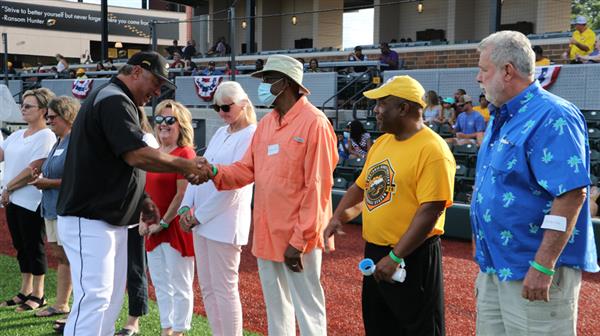 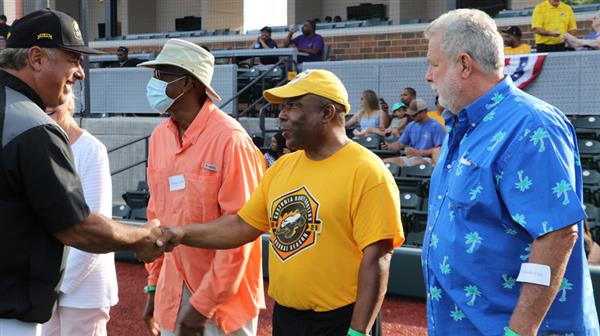 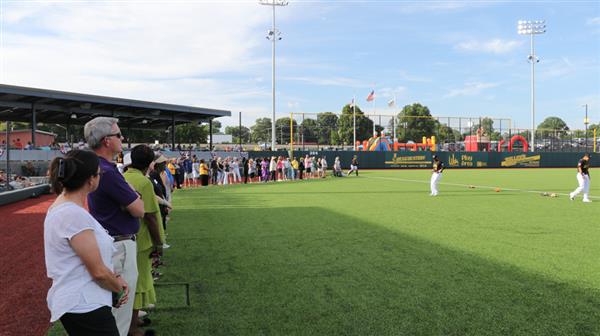 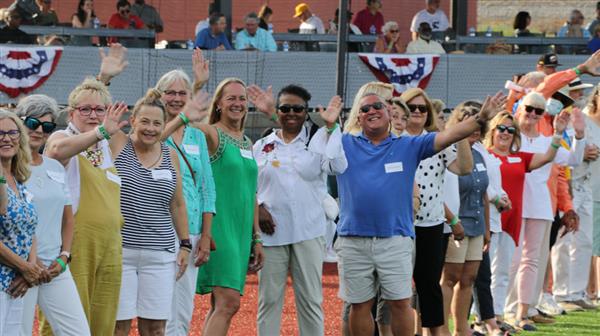 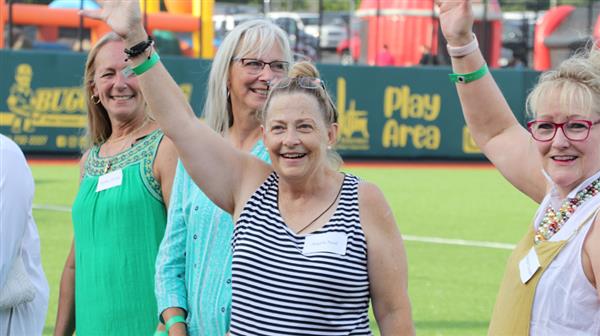 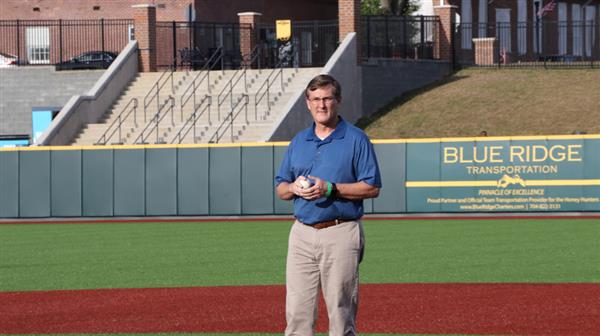 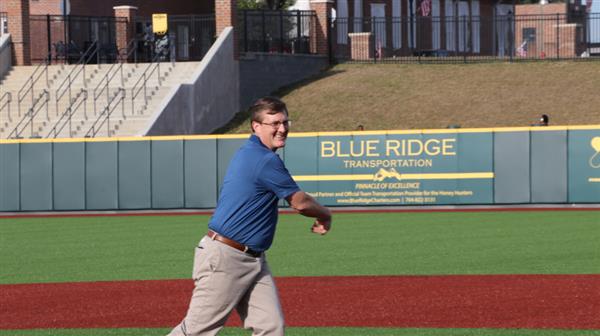 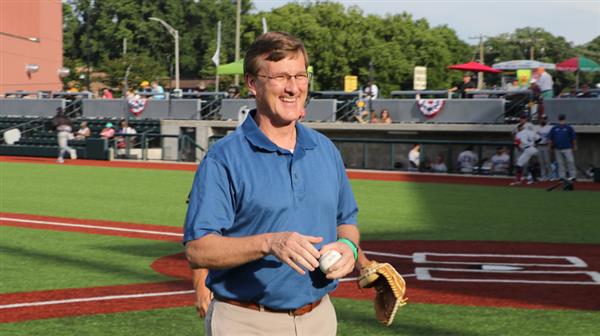