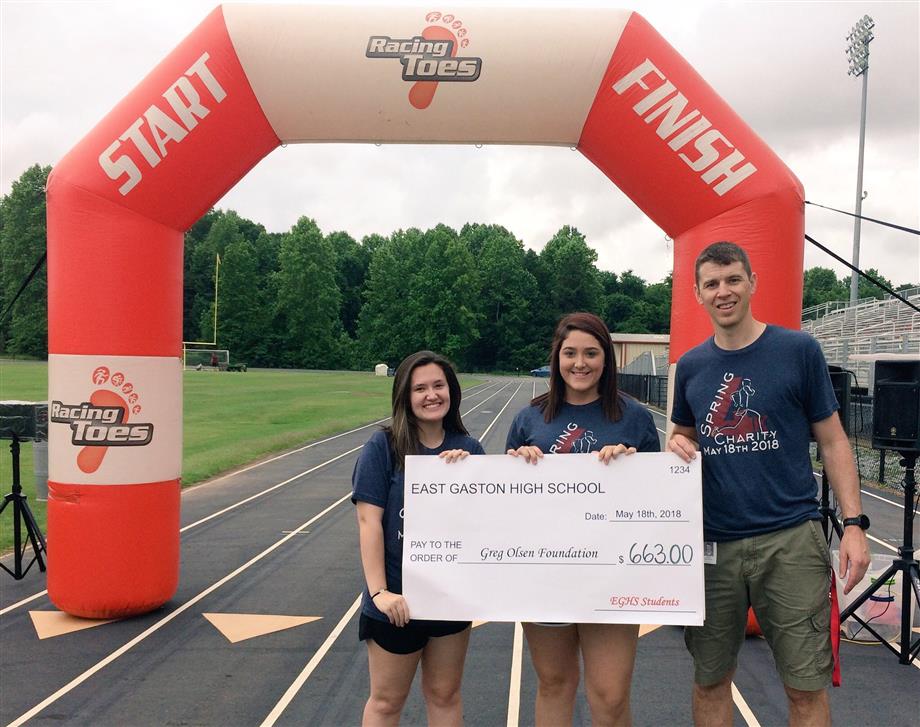 The East Gaston High School biology teacher, who says he is “on loan” to the Gaston Virtual Academy this year, is the recipient of the 2020 DENny Award, which recognizes his efforts in community work.

The Discovery Education Network presents the DENny Award to educators who actively involve students in activities that contribute to the growth of community through effective teaching and learning.  The recognition came after Johnson, who has served as the student council adviser at East Gaston, had to find a new way to organize the school’s Spring for Charity Fun Run.

The student council had been organizing and participating in the community-based run for four years.  Every year, the freshman, sophomore, junior, and senior classes select a nonprofit to represent, raising funds for that charity with the run.  Consistently, they had been able to donate $1,500 to charities each year.

But, Johnson and his students had to find a new plan for the 2020 run.  The event could no longer be held the way it had in previous years because of social distancing requirements to prevent the spread of COVID-19.

“We are so grateful for the support the community gives to our school that we wanted to be able to say ‘thank you’ and give back,” Johnson said of the motivation for organizing the run. “But this past year, we had to do something a little different.”

Teaming up with a racing company in Charlotte, the students were able to organize a virtual event to celebrate the fun run.  Because it was held virtually, community members were able participate, which was something that was not possible at previous on-campus runs.  Participants conducted their own run or walk, logged it on the computer, and asked for sponsors.  While those involved could not gather in person, they were able to communicate with each other through the online race platform.

“We just had a really good group of students,” he said. “They were great at organizing things, and they were very active in staying positive,” said Johnson.  “They were just happy the run was happening in some way.”

The students’ efforts resulted in being able to give to local food banks in Stanley and Mount Holly.  It was a worthy and timely cause especially as people in need are feeling the economic effects of the pandemic.

Receiving the DENny recognition was so unexpected that Johnson almost deleted the email, thinking it wasn’t real.  Shortly after that, he got a text from a friend, asking if he had received anything from Discovery Education.  That is how he found out he had been nominated for the award by another teacher at East Gaston, which he says is the best honor of all.

“The biggest reason that it meant so much to me was that I didn’t know I had been nominated,” he said.  “A colleague saw something I did and was appreciative enough that he took the time and effort to nominate me.  I didn’t even know I was getting the award.”

Johnson is originally from Ohio, but loves calling North Carolina home.  He started teaching in Gaston County at Mount Holly Middle School in 1999.  Two years later, he moved to East Gaston.  He graduated from Lenoir-Rhyne College and earned a master’s degree in 2013 from UNC-Charlotte.  This past spring, he was chosen as the 2020 Star Teacher for East Gaston.

He credits working with great people – students and staff alike – for his love of teaching, which was not his original career path.  Now, he feels like teaching is what he was called to do.

“I work as hard as I can, and I love being a teacher,” he said.  “I can’t imagine doing anything else.”