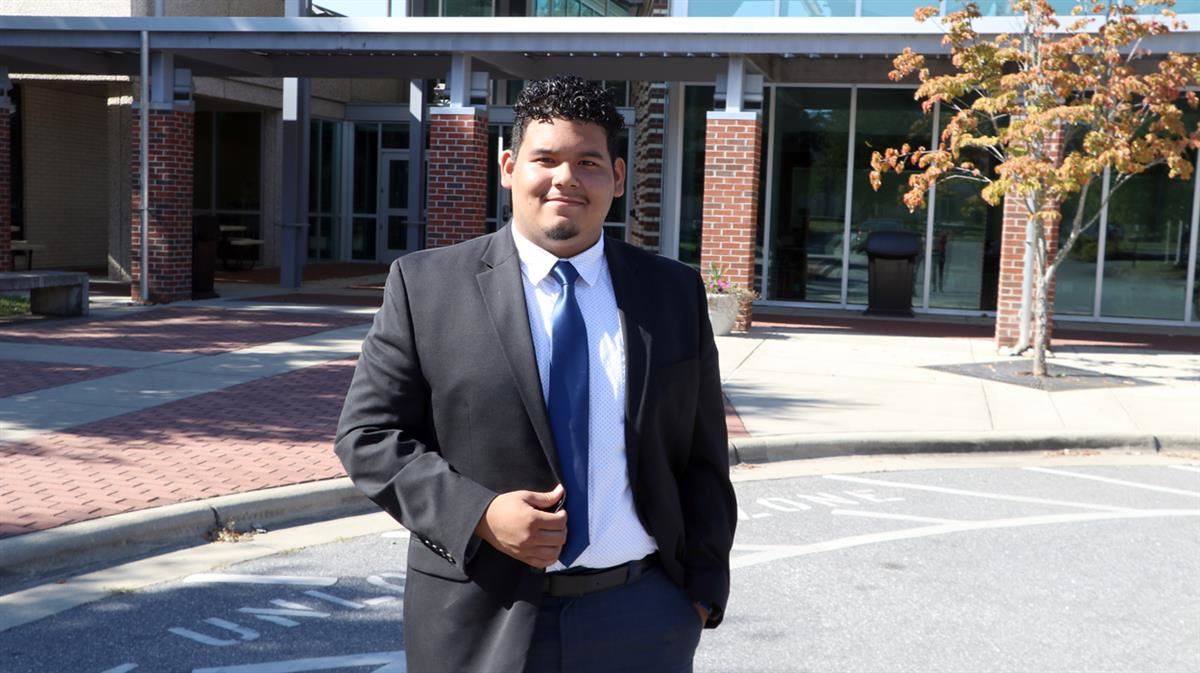 Vasquez, who has served as a member of the Gaston College Student Government Association (SGA), attended his first state board meeting in October.

Vasquez says it was his teachers at H.H. Beam Elementary and Southwest Middle School who pushed him to set goals and do well in school.

“During my eighth grade year, my teachers and counselors urged me to apply to Highland School of Technology and Gaston Early College,” said Vasquez, who thought he would attend Forestview High School with his friends. “They told me that I would have an advantage either choosing a pathway at Highland or obtaining a two-year degree at the Early College.”

Due to the lottery selection, Vasquez was put on the waitlist at both schools, but initially was accepted at the Gaston Early College two weeks prior to the start of school.

Since his time at the Early College, he has become a role model for his peers.  As a sophomore, principal Josh Allen appointed him to serve on the Superintendent’s Student Advisory Council. As a junior, he was a member of the Gaston College SGA, and last year, he was recognized as his school’s “Do The Right Thing” award recipient.

“As president of the school’s Beta Club, I recognized that some families were experiencing difficulty buying food during the pandemic,” explained Vasquez. “To help provide assistance to the families, I reached out to Crisis Assistance Ministries and now our Beta Club helps provide food for families in need every Tuesday and Thursday afternoon.”

In addition, Vasquez has a passion for helping other Gaston College students who are enrolled in the college’s TRiO/Student Success and Support program. The program is open to first generation college students, students of low-income, or students with a documented disability who may experience challenges at Gaston College.

One of his first priorities at the state level is finding ways to increase enrollment at community colleges.

“Our community colleges have seen a 27 percent decrease in enrollment since 2010, and more recently in 2020, enrollment declined 11 percent,” explained Vasquez. “But, programs such as NC Reconnect were introduced at five community colleges this fall to attract adult learners back to college.”

However, one initiative that Vasquez is most passionate about is attracting minority students to our community colleges.

“So many of our minority students start the process of applying for college through the North Carolina Residency Determination Service, but never complete the application,” said Vasquez.  “We’re looking at determining what barriers exist and exploring ways to reduce those impacts.”

Currently a real estate broker, Vasquez will graduate in May with a high school diploma and an Associate of Science degree from Gaston College.  He remains undecided about what four-year college he will attend next fall, but his long-term goal is to get a four-year degree, go to law school, and become a real estate attorney.

Watch Nathan Vasquez on ‘GCS TODAY’
Click the video below for Nathan’s interview on our Channel 21 talk show.