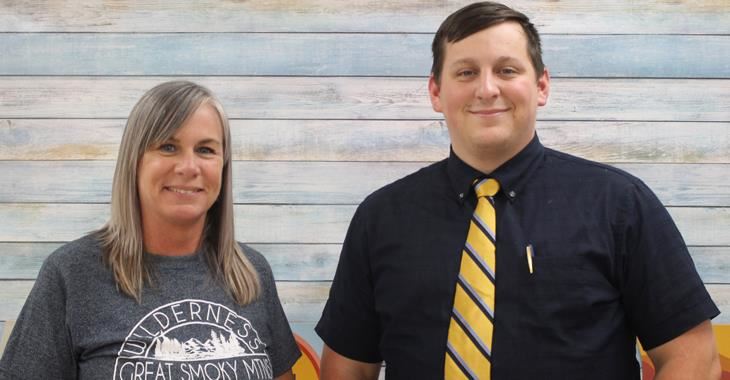 Mother and son teaching together at Holbrook Middle School

Most teachers will tell you that their co-workers feel like family members by the time school starts each year, but in the case of Beth Rhodes and James Parham, they can say it and really mean it.  The mother and son are both new teachers at Holbrook Middle School this year, which is an unexpected, but welcome, twist in their teaching careers.

Rhodes, who teaches eighth grade English and language arts, was hired at Holbrook just a few weeks before the school hired her son, who is a sixth grade social studies and science teacher.  For her, it is her third year in the classroom, having previously taught at John Chavis Middle School in Cherryville and a private school.  This is the first time she’s been able to work alongside her son, James, who is a first-year teacher at Holbrook.

They’re both excited to be at the same school and are fully embracing the challenges and opportunities they know they will face during the new school year.  They both echoed the sentiment that they know Holbrook is where they are meant to be.

“As soon as I got the call from Mr. Ross, the principal, asking me if I was ready to be a Holbrook Lion, I knew that my answer would be yes,” Parham said.

His mom said she felt the same type of connection to the middle school in Lowell.

After spending a large part of her career as an insurance agent, Rhodes knew she was meant to be a teacher, and she finally decided to embrace it. Coming in as a lateral entry teacher, she is excited to experience another year of helping students learn.

“I knew deep down that teaching was my calling,” she said. “Sometimes, I think we run from what we’re supposed to be doing, but I wanted the fulfillment of helping students learn new things every day. That’s what really drew me in.”

Working with her son is an added bonus that she didn’t expect.

“James called me and told me he had an interview at Holbrook, and I said ‘Are you kidding me?’” she said. “And he said, ‘No, I’m not kidding, Mama.’”

James, like his mom, also felt called to teaching early on, but he decided to pursue some other career options to see where it led him.

“I went to law school then became a police officer,” he said.  “Teaching was something that I had passing thoughts about, but I never really committed to it. Then, I served as a school resource officer, and I remember being so jealous of the teachers for what they got to do and seeing them interacting with students on a daily basis.  I knew I wanted to do that, too.”

Preparing for the first few weeks of school was an emotional time for James, who said he had an overwhelming moment when he realized he had finally ended up where he had wanted to be all along.

“Before we had our open house, I was looking at a roster that was posted for parents, and the first time I saw a student’s name listed next to mine as the teacher … It seems like a very simple thing, but it meant a lot to me.  I’m doing what I should have done a long time ago,” he said.

“It’s been a wild ride to get where we are now, but I wouldn’t change any of it,” Rhodes said, agreeing with her son.  As for those motherly instincts?  They’re still going strong as she works across the same school campus as her oldest son.

“Whenever I get something challenging figured out, I think, ‘Oooh, I better call James and tell him the shortcut I found,” she said, laughing.

Now that they both have the first couple of weeks of school under their belts, they’re settling into their new roles as Holbrook Lions easily.

“This year has been even better than I imagined it would be,” Parham said. “The students bring so much personality to my classroom and new ideas to class discussions. I’m excited to learn from them this year, too.”

“It’s been very busy getting started,” Rhodes agreed. “James and I have talked a bit about our experiences and shared what that has been like, which is a great thing to get to share with my son.  Looking back on the first week of school, we agreed that we were tired, but it was the best kind of tired.”