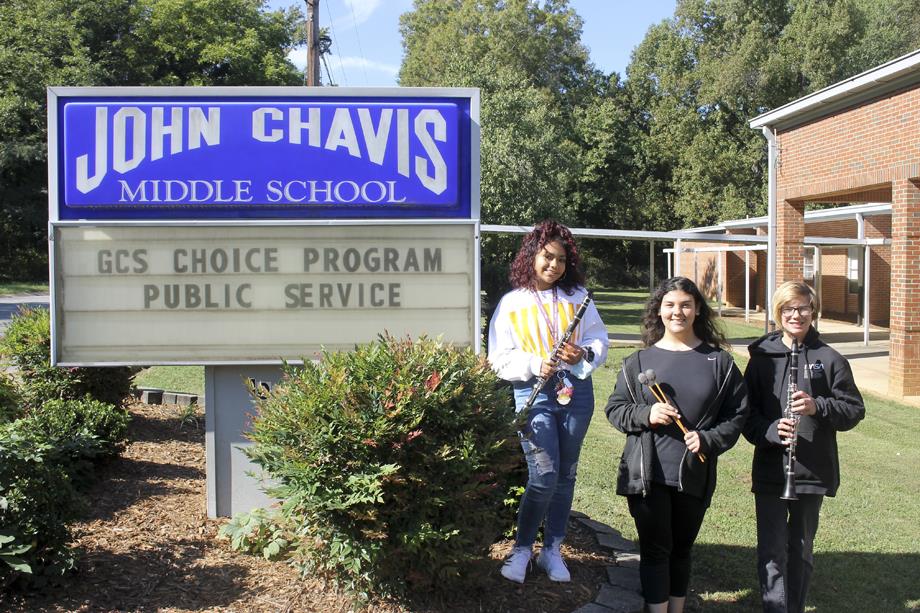 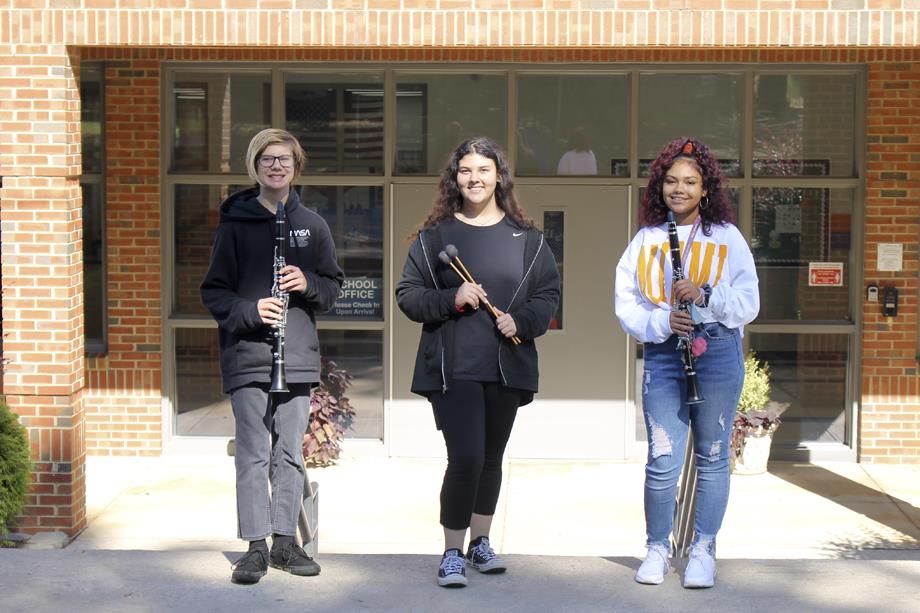 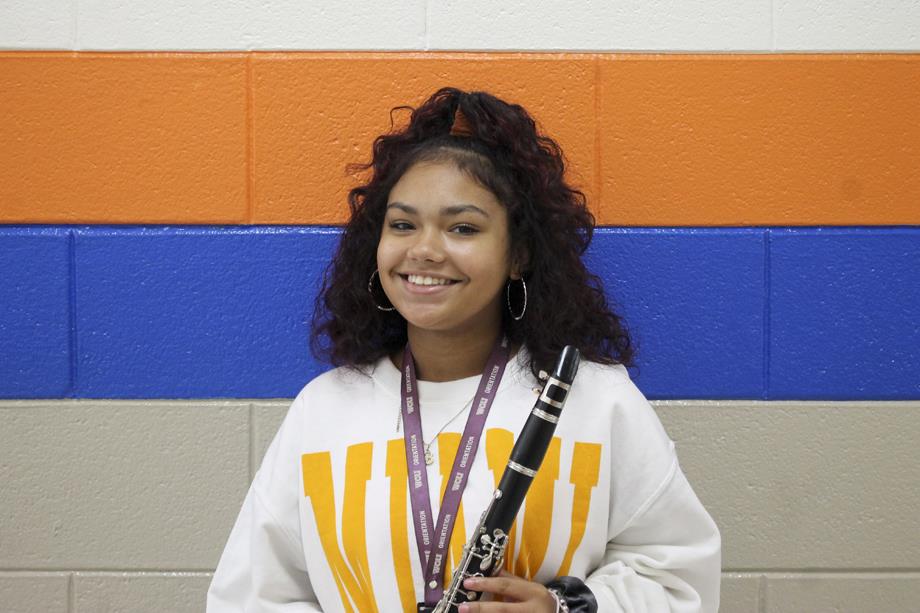 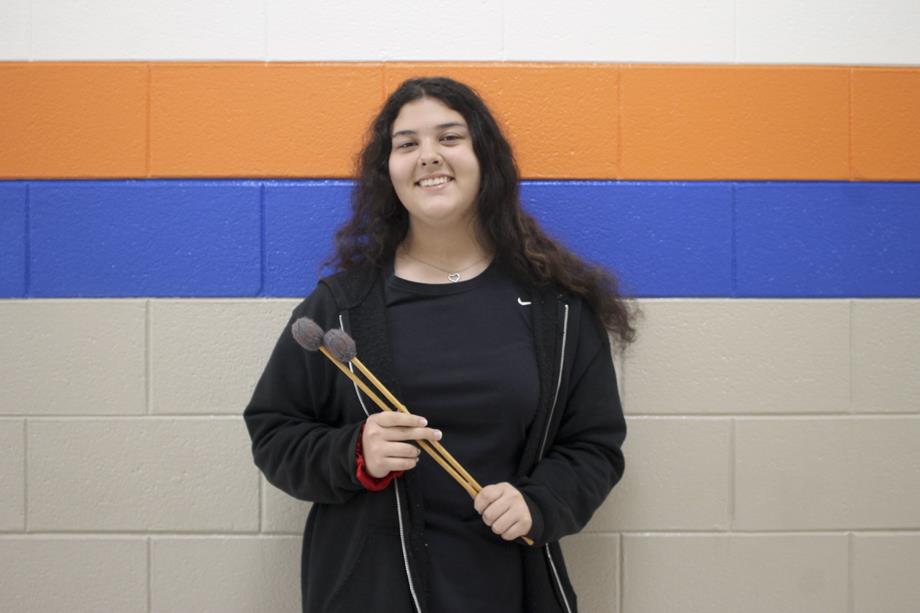 Three eighth-grade students at John Chavis Middle School are preparing for their future with the Cherryville High School marching band.  In fact, they’re already a part of the high school band while still being in middle school.

Daniel Bredin, Beonka Adams, and Emily Watts are the only students from Anna Waters’ band class who get to participate in Friday night football performances for Cherryville High School.  It was an idea that Waters had from the start of her time at Chavis.

“When I was student-teaching at a middle school, the band director let his eighth graders march, and I had never heard of that before,” she said. “The students loved it, and it was both challenging and rewarding for them.”

When she started at Chavis, Waters met with Cherryville band director Mark Ewing, who had a similar idea of getting students at the middle school involved. From that point on, they put the plan into action. The concept creates a direct link between middle school and high school band and serves as a way to encourage eighth graders to continue in the band program when they get to high school.

“At the end of school last year, I talked to the rising eighth graders about it,” Waters said. “The opportunity is intended for students who want more of a challenge and want to push themselves.”

Bredin, Adams, and Watts signed up for band camp in July and spent two weeks learning music and marching with the high schoolers. They stepped up and took their place with the high school band. Looking back, the students believe it was the right decision.

Waters says the benefits of marching band are evident every day in her classroom.

“From a musical standpoint, they’re playing high school level music,” she said. “It hasn’t been easy for them, but they have really taken on the challenge. But in addition to that, their leadership skills have grown. They help their classmates if they don’t know something or they’ll ask more questions. The whole goal has been to help improve their skills, and we’ve seen that happening on a daily basis.”

The students’ confidence in their own ability has increased over time, and they have gotten used to the excitement of playing at high school games.

“I was nervous at first,” admitted Watts, who has family members who participated in marching band. “But I feel really comfortable now because I know that I’ve grown in my skills, and I can see how far I’ve come.”

Ewing said having these students participate in marching band is beneficial from his viewpoint as a high school director.  “It allows the opportunity for students to begin building a rapport with and understanding the expectations of the high school band program to further prepare them for their band experience during their own high school years.”

It’s a sentiment that Adams echoes when thinking about her future with the band.

“The most challenging part is keeping up with the high school students when they play because we don’t have as much experience,” she said. “But, getting to do this now puts us ahead for next year when we’re in the marching band.”

Waters says nurturing a love of music and the arts is so important for her students.

“Band is one of those classes where you can fully take advantage of independent practice and what you want to get out of it,” she said. “As long as you have an instrument, you can work as much as you want on your skills. I have students that are on all levels of playing in my classes, and getting to see Daniel, Beonka, and Emily excel in the high school marching band makes me so proud.”

So, what is Bredin’s advice for other students who might be interested in taking advantage of the opportunity?

“I would absolutely say to do it,” he said. “But, you have to be serious about it and be eager to learn. That’s the only way you’re going to get better at playing.”

Marching Band Fanfare
The Gaston County Schools Marching Band Fanfare is set for Saturday, October 30 from 3:00 until 7:00 p.m. at the Stuart W. Cramer High School football stadium. The event showcases the halftime performances of our high school bands. Admission is $7. The public is invited.