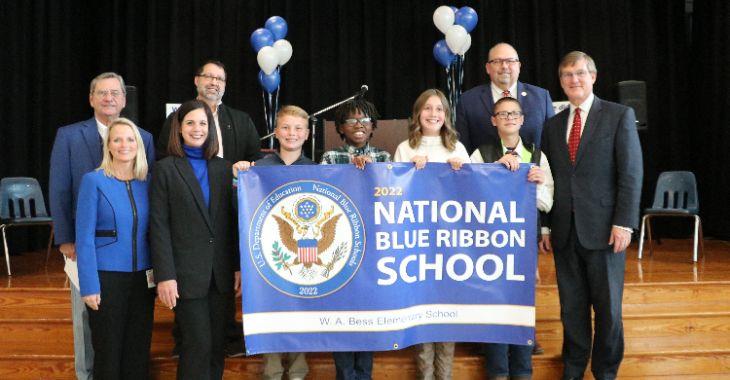 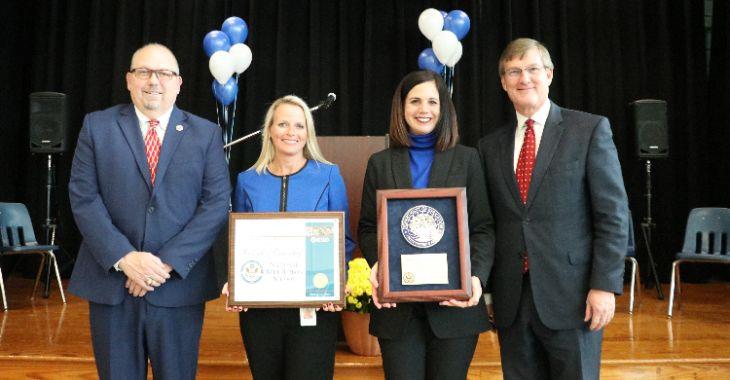 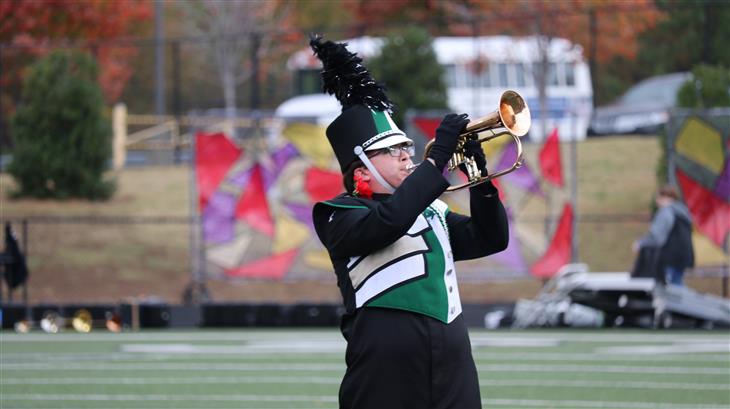 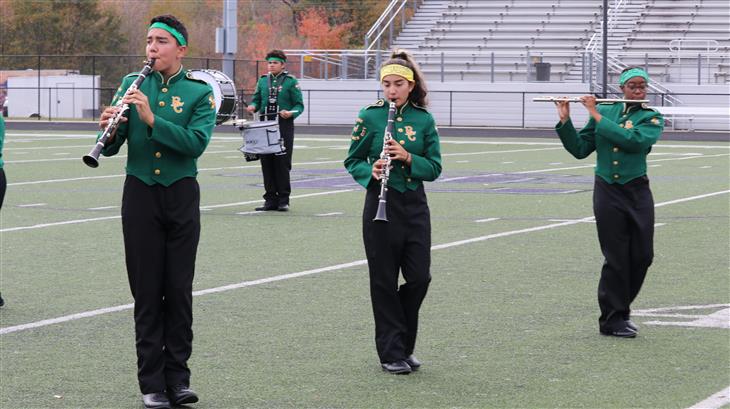 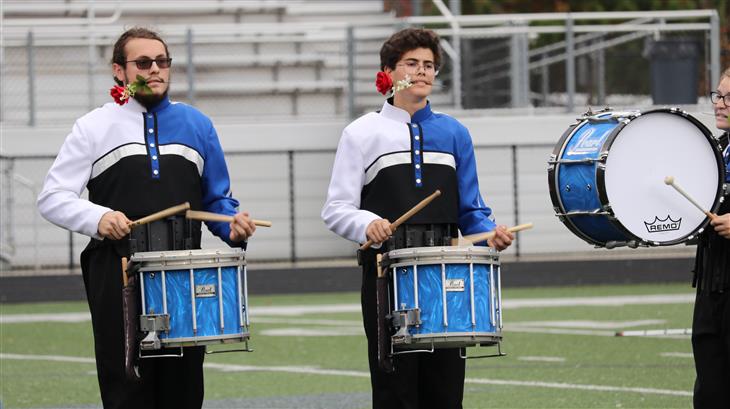 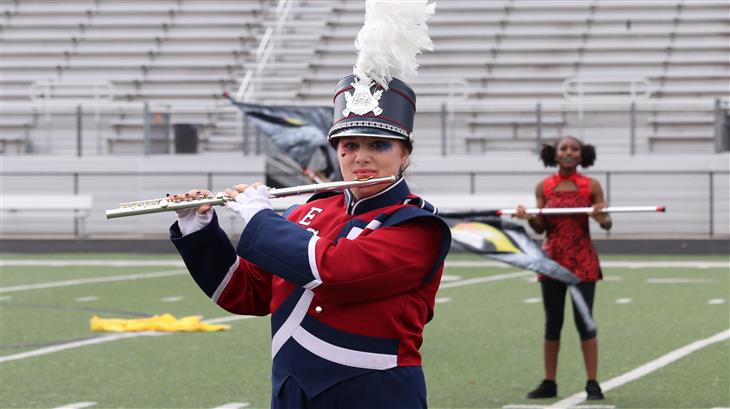 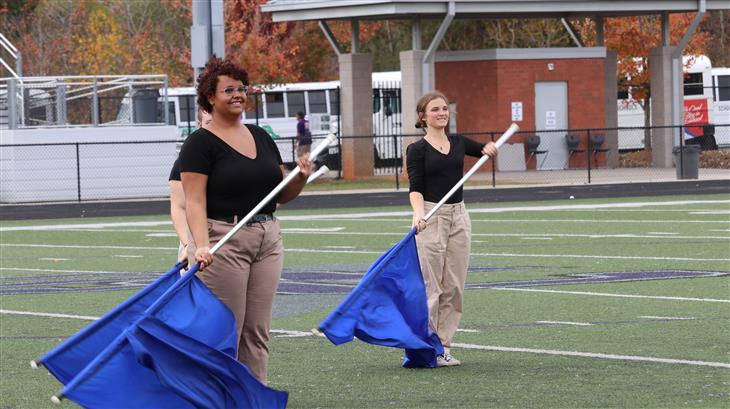 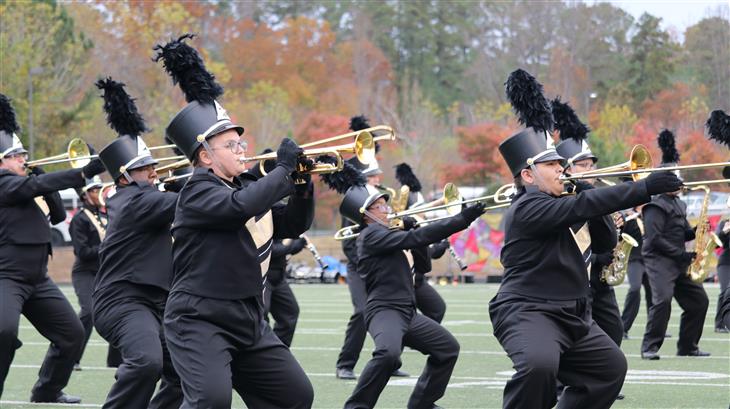 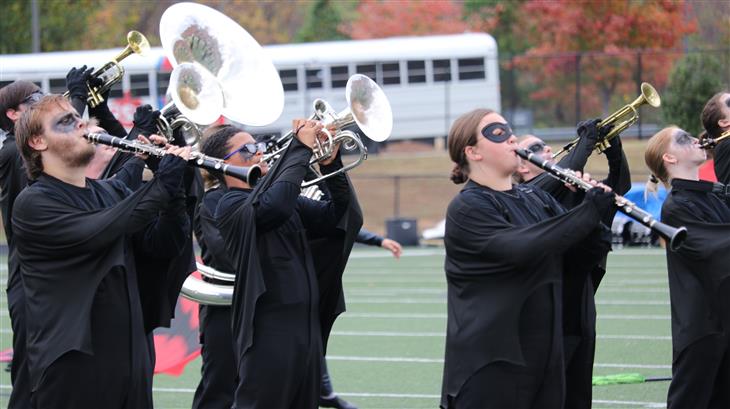 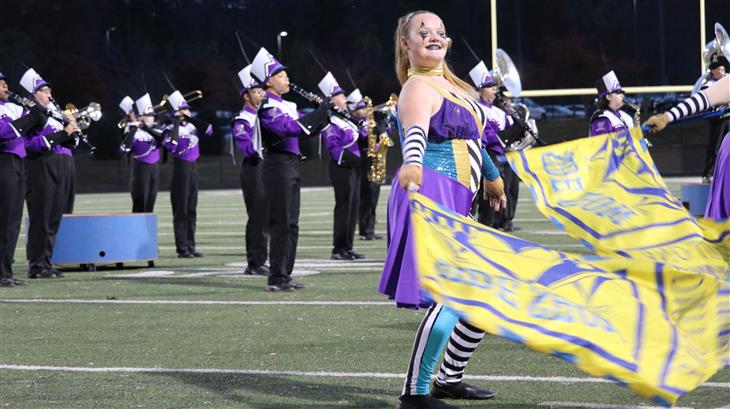 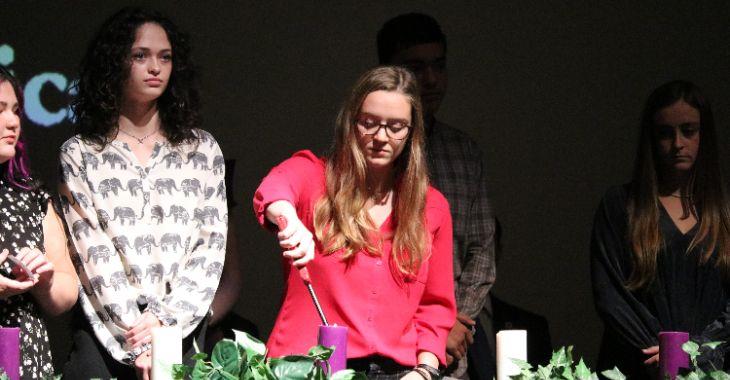 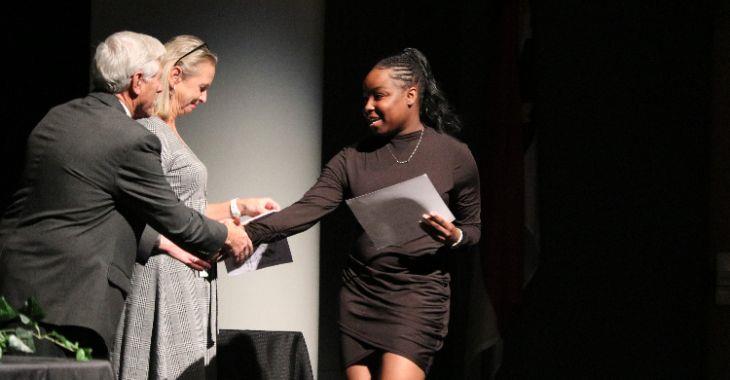 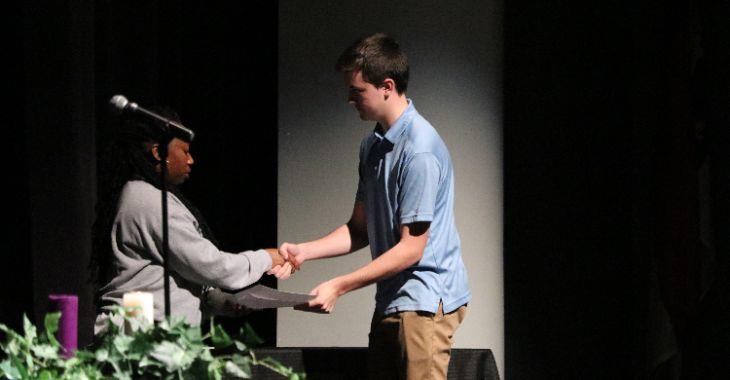 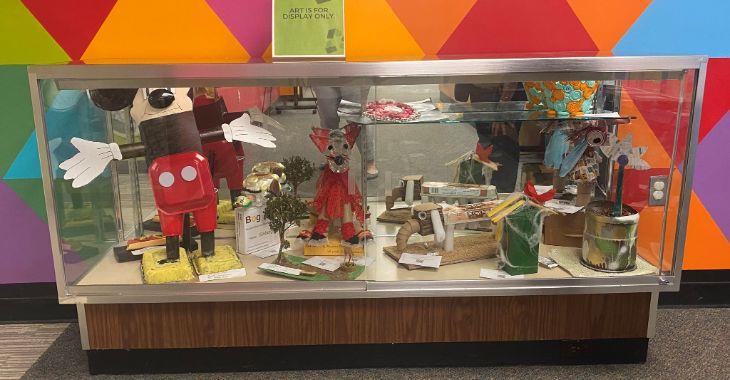 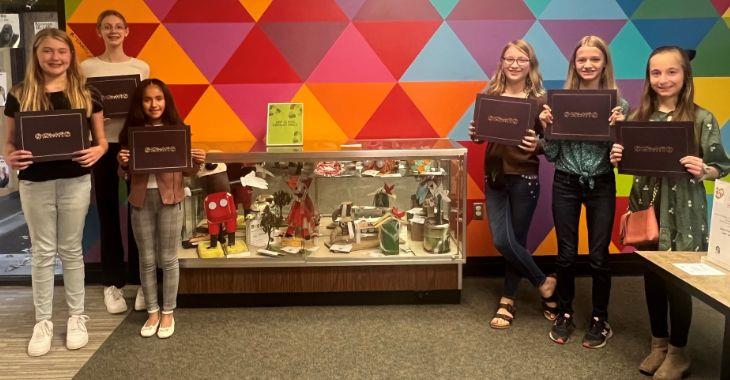 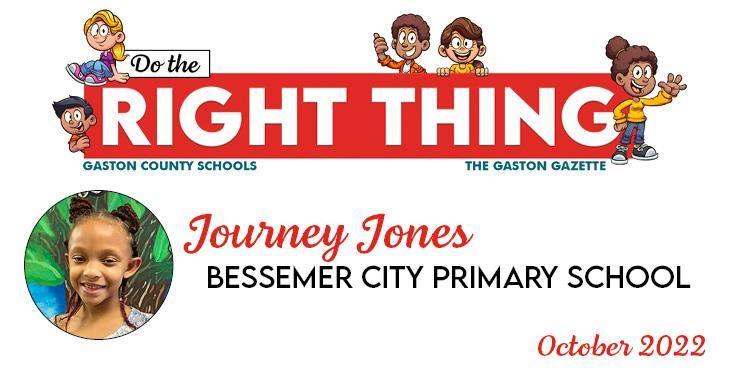 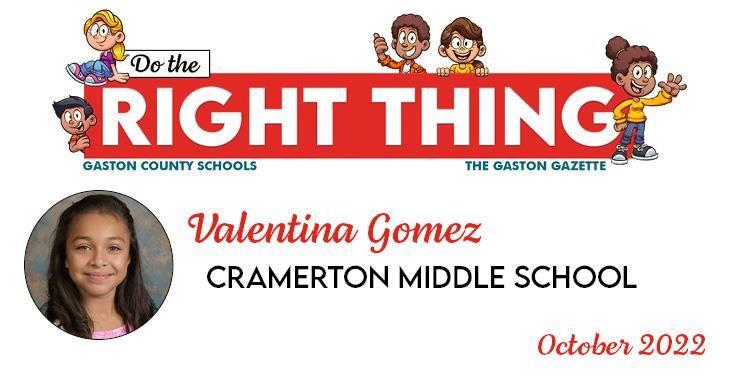 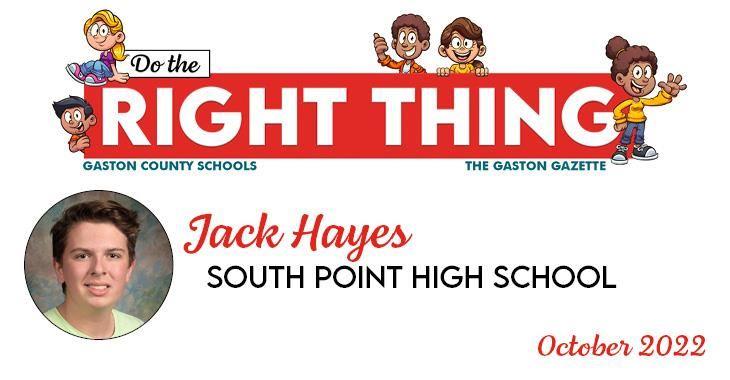 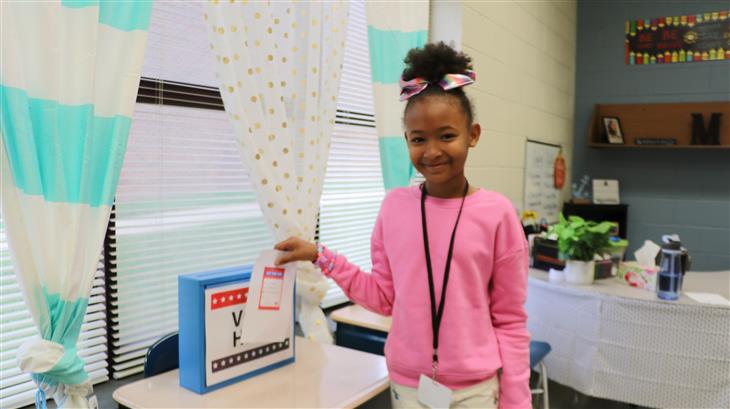 W.A. Bess Elementary was honored during the 2022 National Blue Ribbon School ceremony in Washington, D.C.  Principal Laura Clark, teacher Nikki Simmons, and Superintendent of Schools W. Jeffrey Booker attended the ceremony to accept the award from the U.S. Department of Education.  The school conducted a ceremony on Thursday, November 17 to celebrate the school’s distinction as a 2022 National Blue Ribbon School.  The recognition is given annually by the U.S. Department of Education to schools that have shown consistent outstanding academic performance and achievement.

Ashbrook High School and Hunter Huss High School students hosted a trick-or-treat event at their school for the community.  Students decorated classroom doors and handed out candy to children.

Ashbrook High School held a fall arts showcase that involved students who are in the school’s art, band, chorus, and theater classes.

As part of the Gaston County Career Awareness Program, W.A. Bess Elementary fifth graders participated in hands-on activities such as learning how to take temperatures, blood pressure readings, check a pulse, and how to properly perform CPR.

Bessemer City Middle School promoted Hispanic Heritage Month by hosting a discussion panel of eighth grade students who identify as Hispanic or Latino.  Students were engaged in the program as they learned about food, music, holidays, school experiences, and challenges that are faced in the Hispanic culture.

The Stuart W. Cramer High School Stagestruck Players presented “A Cemetery Walk Through Time” at New Hope Presbyterian Church in Gastonia.  Students gave tours through the cemetery and introduced participants to people from the past.  The event served as a fundraiser for the school’s theater arts program.

The East Gaston High School cheerleading team competed in the Davidson College Spirit Invitational on October 29 and received the highest score of all teams competing in the game day routine category.  The cheerleaders also competed at the Mountain Regional Cheer Competition on November 5 and received first place in the traditional routine and third place in game day routine categories.

Forestview High School senior Elizabeth Foor passed the Board of Review and became an Eagle Scout.  She completed the requirements of an Eagle Scout in three years after Boy Scouts of America allowed females to join.  Her project included constructing a covered bench and swing set for Dove’s Nest, an outreach program of the Charlotte Rescue Mission that provides temporary housing for women who are transitioning out of an addiction program.

Forestview High School junior Rennie Liu won the 3A west regional individual tennis title and was a semifinalist in the state 3A tennis individual championship.

Gaston Early College of Medical Sciences partnered with the Chick-fil-A Leadership Academy and involved 30 students, who packaged books for Costner Elementary.  The students will participate in monthly leader labs and three community service projects throughout the year.

A group of Gaston Early College of Medical Sciences students loaded items into a moving pod and made tie dye shirts for the Gaston County Child Advocacy Group.

Hunter Huss High School students in Jessica Brigola’s class connected virtually with students more than 8,000 miles to learn about Philippine culture from their peers and share about the culture in America.

Lingerfeldt Elementary used the election season to nominate its first student government on November 11.  Students were elected from each of the third, fourth, and fifth grade homerooms.  Students campaigned and provided speeches to their classmates.

Lingerfeldt Elementary teacher Elizabeth Conyers was named the Department of Exceptional Children Teacher of the Year.

McAdenville Elementary’s first grade class was featured on Queen City News Channel 46 as part of the TV station’s hometown series.  The news crew filmed students preparing to sing at the Christmas Town USA ceremony.  In addition, McAdenville students have been invited to participate in the tree lighting ceremony and the town’s yule log parade.

McAdenville Elementary celebrated the end of a successful Red Ribbon Week with a pep rally on October 28.  Cheerleaders and football players from Stuart W. Cramer High School participated in the pep rally and spoke to the students about why they choose to be drug and bully free.  Each class made up a cheer and performed it during the event.

North Gaston High School senior Crystal Bender won first place at the Keep Gastonia Beautiful recycled art contest for her piece titled “Shlomes’ Hat.”  She constructed her life-size hat (able to be worn) out of cardboard, newspaper, magazines for color, and other objects.

Pleasant Ridge Elementary held a Math Fair on November 8 with 146 student projects on display. Eighteen of the projects were selected to advance to the Western Regional Math Fair of the North Carolina Council of Teachers of Mathematics, which will be held at Appalachian State University in March 2023.

The Sherwood Elementary PTO received a $5,000 grant for the establishment of an outdoor classroom.

South Point High School senior Joshua Crowder was named recipient of the 2022 Michael A. Kahn Community Service-Scholastic Scholarship Award, which is presented by the Michael A. Kahn Family Foundation.  He will be recognized by the Charlotte Touchdown Club at the 2022 Bronko Nagurski Trophy Awards Banquet on December 5.

The South Point High School marching band competed in the Pride of Robinson Invitational at Robinson High School and placed second in percussion and second in color guard.

Springfield Elementary received a $6,250 grant from American Woodworks to purchase new computer chairs for teachers and to help with resurfacing a blacktop space where a mural will be created.

York Chester Middle School held its annual International Music and Arts Festival and had significant support from the community.